During the research for my book Walt Disney and Live Action, I interviewed the late David Swift, the writer and director responsible for both The Parent Trap and Pollyanna for Disney. I’m making available a clip from my interview with Swift so you can listen to him yourself. Enjoy! Of course, you can read a lot of additional material from Swift in my book, as well as get the detailed behind the scenes story of how his two films for Disney with Hayley Mills were created.

I’ve done more than 15 radio interviews about my book Walt Disney and Live Action thus far. Some of the most enjoyable were two interviews by Mary Jane Popp on her “PoppOff” show on KAHI in California. They’ve given me permission to post the second interview from earlier this year. Enjoy!

In the 1950s, Walt Disney’s television mini-series based on the life and exploits of Davy Crockett ignited a national craze that consumed popular culture. By the time the frenzy fizzled, the iconic frontiersman from Tennessee had helped the Disney Studio sell $300 million worth of merchandise—including 4 million records, over 14 million books, and far too many coonskin caps to count. Davy Crockett had become a topic of conversation everywhere from the local Laundromat to New York City society parties. He had been alternately toasted and roasted in the pages of Time, Look, Harper’s, The New York Times Magazine, and Saturday Review. He even had been eulogized on the floor of the United States Congress.

In Walt Disney and Live Action by Disney historian John G. West, go behind the scenes and explore the fascinating story behind Disney’s Davy Crockett. Learn how the episodes were made, the controversy they provoked, and why Disney brought Davy Crockett back to life after killing him off. Also learn about the making of Disney’s television features highlighting other American heroes, real and fictional, including Zorro, Elfego Baca, Swamp Fox, Texas John Slaughter, and more. In addition, get to see for the first time previously unpublished photos taken during the filming of the lavish recreation of the Battle of the Alamo in the third episode of Davy Crockett. For a preview, see the gallery below. 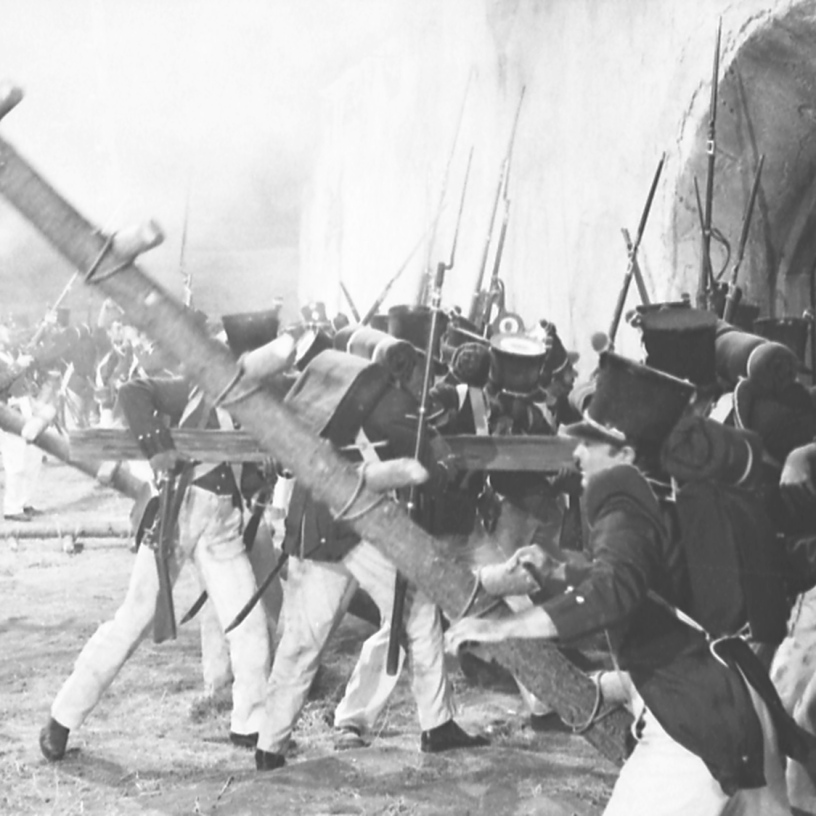 Learn about the making of Disney films starring Hayley Mills in the new book Walt Disney and Live Action by John G. West.

British child actress Hayley Mills starred in six films for Walt Disney: Pollyanna (1960), The Parent Trap (1961), In Search of the Castaways (1962), Summer Magic (1963), The Moon-Spinners (1964), and That Darn Cat (1965). The daughter of distinguished British actor Sir John Mills, Hayley soon became an international phenomenon in her own right, winning her own Academy Award as Best Juvenile Actress of the Year (for her role in Pollyanna) and receiving fan mail of 8,000 letters a week. Now you can go behind the scenes on each of Mills’ films for Walt Disney and explore how they came to be made in Walt Disney and Live Action by Disney historian John G. West.

Based on extensive research at the Disney Studio Archives as well original interviews with many of those who worked on the films of Hayley Mills, Walt Disney and Live Action is a must-have for anyone who loves the Disney films of Hayley Mills. Learn about the on-the-set pranks by her brother Jonathan, the deleted scenes from The Parent Trap and The Moon-Spinners, and the comments made by the actors and actresses who worked with Hayley. Find out which one of Hayley’s films was made to solve a problem Walt Disney had with his wife. And get to see rare never-before published photos of Hayley Mills at her 16th birthday celebration, riding her horse, and relaxing at home. Plus, learn about the meaning and making of many other Walt Disney live-action features, including 20,000 Leagues Under the Sea, Treasure Island, Mary Poppins, Davy Crockett, The Absent-Minded Professor, Swiss Family Robinson, and many, many more

Read the new book Walt Disney and Live Action by John G. West and learn about the real story behind the making of Mary Poppins.

Mary Poppins (1964) is one of Walt Disney’s most beloved live-action films and one of the great Hollywood musicals of the 1950s and 60s. Based on the children’s books by P.L. Travers, the film version of Mary Poppins was nominated for 13 Academy Awards and won five, including Best Actress (Julie Andrews), Best Original Song (“Chim Chim Cher-ee”), and Best Original Score (by the Sherman brothers). A wonderful fictionalized account of how Walt Disney came to make Mary Poppins was presented in the film Saving Mr. Banks starring Tom Hanks and Emma Thompson.

But the real story is just as fascinating, and now you can read about it in Walt Disney and Live Action by Disney historian John G. West. Based on research at the Disney Studio Archives as well original interviews with many of those who worked on Mary Poppins, Walt Disney and Live Action takes you behind-the-scenes to explore how Mary Poppins and many other Disney live-action films were made.

Learn about the film musical that almost convinced Walt Disney not to make Mary Poppins, as well as the never-completed musicals that he commissioned its success. Discover how the film’s special effects sequences were staged, and how the film’s Art Director made sets built to 1/4 scale look real. Learn about the stories behind the movie’s songs, the deleted sequences, and the actress who really wanted to play Mary Poppins but who was convinced to accept a different part instead (resulting in a whole new production number early in the film). Experience the lavish film premiere that launched the film, and explore the deeper meaning of Mary Poppins as a commentary on the breakdown of the modern American family. Plus, learn about the meaning and making of many other Walt Disney live-action features, including 20,000 Leagues Under the Sea, Treasure Island, Pollyanna, The Parent Trap, The Absent-Minded Professor, Swiss Family Robinson, and many, many more. You will also get to see more than 80 behind-the-scenes photographs, many published for the first time. For Mary Poppins, you will get to see many photos taken on the set during the film’s grand production number “Step in Time.” For a preview, see the gallery below. 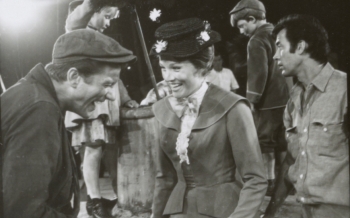 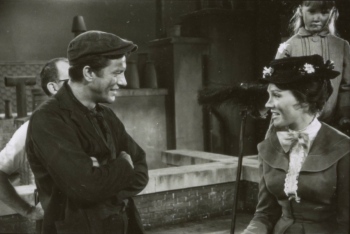 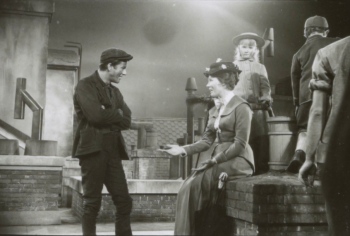 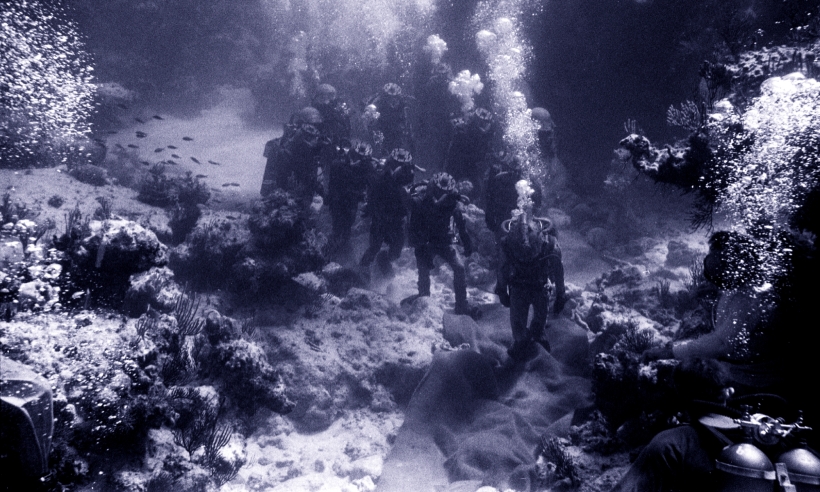 Read about the making of Walt Disney’s classic adventures in Walt Disney and Live Action by John G. West.

Probably best known for his animated films and live-action fantasies like Mary Poppins and The Absent-Minded Professor, Walt Disney also produced many full-throated historical adventures, including 20,000 Leagues Under the Sea, Treasure Island, and Swiss Family Robinson. Now you can go behind the scenes on each of these films and many more in Disney historian John G. West’s Walt Disney and Live Action.

Learn how Walt Disney’s love for Tom Sawyer inadvertently led him to produce a film version of Treasure Island instead, how studio Set Decorator Emile Kuri located the pipe organ played by Captain Nemo in 20,000 Leagues Under the Sea in someone’s garage, and how the Disney studio had to hire 400 workers to rebuild an entire lagoon after it washed away in a monsoon before they had finished shooting key scenes for Swiss Family Robinson. Filmed with fascinating anecdotes and stories, Walt Disney and Live Action is based on extensive research in the Disney Studio Archives as well as original interviews with many of those who actually made Walt Disney’s live-action films and television features. The book includes more than 80 behind-the-scene photos, some never before published. Walt Disney and Live Action is a must-have for anyone who loves the classic Disney films of the 1950s and 60s.

Purchase now the new book by John G. West, Walt Disney and Live-Action: The Disney Studio's Live-Action Features of the 1950s and 60s and learn more about the meaning and the making of the live-action features of Walt Disney.
Loading Comments...